Several years ago, I purchased two Datsun 510 race cars. I purchased Harry Stewart’s B sedan 510 and Pat Crumm’s 510. My intent was to restore one or both cars to their former glory. Pat’s car had raced and the runnoffs and had several track records throughout Southern California.

Harry’s car had history back to 1972 as a B sedan car and was in amazing shape for a race car of it’s age. Ultimately I decided to go with Harry’s car as it was better documented and had a better paint scheme.

Pat’s car was sold to Les Cannaday, who in turn sold it to Bill Pritchard. Bill had Les build Pat’s car into a copy of Bill’s old 510 race car and today it is a fine example of a beautiful Vintage 510. 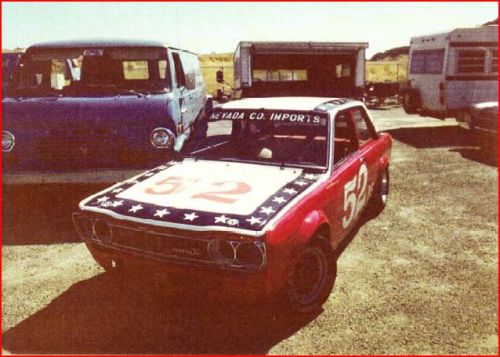 Harry’s 510 started out as a autocross car and qucikly became more interested in road racing. Shortly thereafter he modified this 510 to go road racing with the addition of a roll cage and fuel cell.

His 510 was first raced at the Rose Cup in 1972 by Robert Thulander who worked for Harrry Stewart. Robert delivered cars and had a competition license, and was more than happy to volunteer and race this 510.

The car had never been to tech, and didn’t even have a log book but not knowing any better Harry towed the car to portland and somehow talked his way into the race. On race day there was weather, raining on and off, making the choice of tires a real challenge. Just before the race started Harry’s team realized that the throttle was sticking and although the sun came out and dried the track, Harry’s car  was still on their rain tires. Most teams switched to dry tires. Just as the race started it downpoured again.

After such a strong showing, Robert was sponsored by Vallejo Datsun in a 1200 and Harry decided to race his own car. 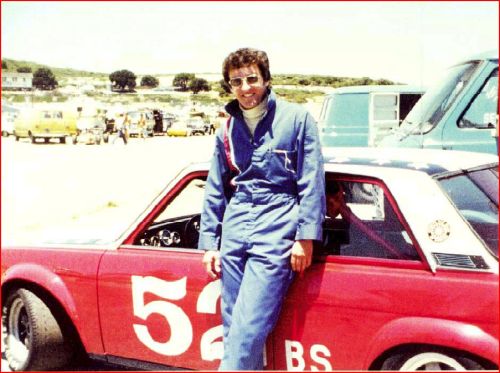 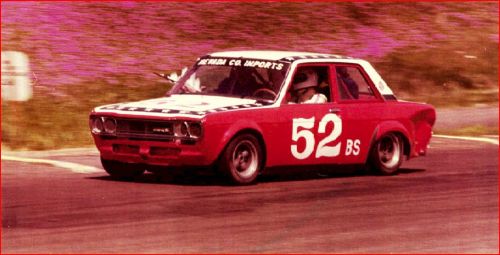 After the May Laguna races Harry and his team decided to make his car go faster, This was accomplished with a modified SSS head sent to Air Flow Research, twin 44mm Solex carbs, forged pistons, Carrillo rods and a factory counterweighted crank. At or around this time Harry employed Clyde Kissell. Clyde was from Colorado, and after WWII he worked on a number of race cars in the midwest. Moving to Southern California found Clyde working for a number of race teams before he relocated to Grass Valley CA. Harry credits Clyde with the cam oiler idea (spray bar), of which is still employed on Datsun 510 race cars to this day.

Suspension modifications were on tap too with the modification of the front struts and rear trailing arm geometry. Harry relied on the HP book “How to Modify Datsun engines and chassis” as their guide, as the Datsun competition department was not very helpful even though Harry was a Datsun Dealer. Parts from BRE, FAR and Bob Sharp were hard to come by too, so Harry and his team fabricated their own parts as much as they could. Including a cam oiler modification, that he mentioned while buying parts from Mac Tilton. Next thing you know, Mac was offering a cam oiler!

To this day Harry thinks that they could have been the regional champion in 1973 but ultimately modifying the car cost them the season due to teething problems with the new hotter setup.

In September 1975 Harry sold the car to Art Charles. At the time this car was in first place in regional points. A guy by the name of Sullivan with a 610 had to win the last races of the season to beat Harry for the regional title. Harry, even though he sold the car finished 2nd for the season…

In 1977 Harry purchased a N.T.M. Mark IIV Sports racer with the intent to power it with a Datsun power plant. It would be several years before Harry would see his 510 again. 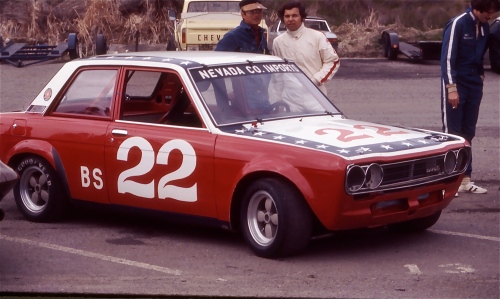 Art’s Dad, Merl introduced him to racing at age 4 by hauling Art out to the Los Angeles Coliseum to watch midget racing. Art never recuperated. By age 14 Art and his Dad went to the sport’s car races at March Air Force Base in Riverside. “When I saw Jim Kimberly’s (as in Kleenex) Ferrari go by shifting into 5th gear right in front of us, that was it- I had to race. Oh, and Merl was affected too; he bought an XK120 Jaguar from Coventry Motors in Whittier within minutes”. 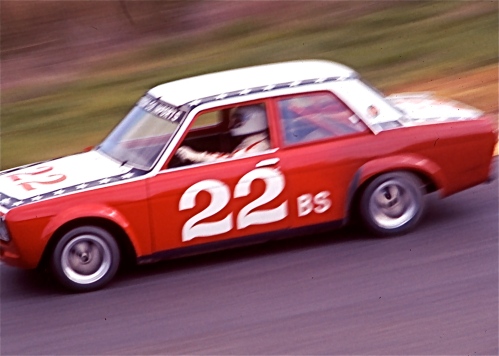 Art purchased the 510 in late 1975, and learned several valuable lessons including how to rebuild a race motor from Harry.

Art, with all of his engine parts on the kitchen table (to keep them clean) and Harry on the phone to explain to Art how to build a Datsun race motor.

At Poca City Art had a little  drama when his throttle stuck open. This track was in a local park; a street race in essence. After leaving the track at full speed, he managed to miss a tree that he was braced to hit head-on going way too fast, and then he had time to kill the engine and stop the car, with the front two tires in the water after skidding to a stop at the edge of the Park’s lake. During this off track experience Art hit a rock in the ground and sheared off the pan leaving the crankshaft exposed with a few blades of grass and dirt on it… 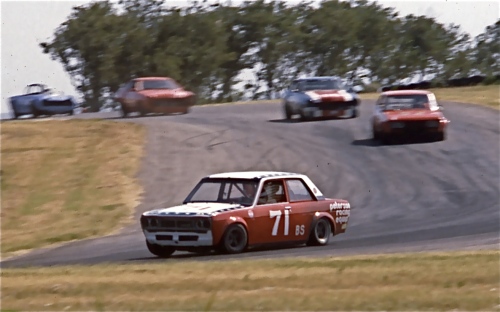 In 1979 Art moved back to California and took a job at the University of California, Irvine and started racing in the winter at Riverside and Willow Springs. Each Spring Art would haul the 510 up to the San Francisco bay area where he would race at Sears Point and Laguna Seca for the remainder of the season. 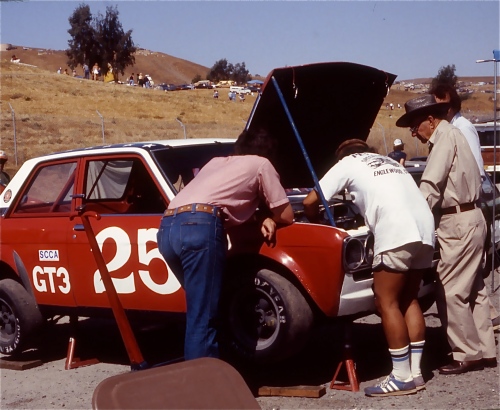 “Pictured here in 1981 are the principals of that 1979 victory:  That’s me with my hands in the innards with my racing shop’s T-shirt from Engelwood, CO. That shop was run by the late Ben Peterson, who taught me how to do quick piston changes among other things- just like in the drags. Ben piloted an unlimited dragster.
On my left in the blue jeans is Ric Coppes who started with me on day one. He went all the way to our last day some 25 or so years later. We still have our Sunday morning breakfasts to watch the formula one races.
On my right is my late father, Merl, who even at his late age was right there with us doing the refueling during both Enduros. I believe that’s Harry in the white shirt in the background. This was definitely a high point for all of us!” 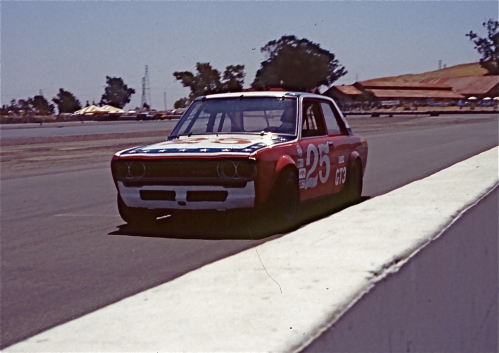 Qualifying in the 1981 Enduro

In the Fall of 1984 Art qualified for the runoffs in Atlanta and took the 510 back to run at the Nationals. It was a cold week that year; so cold that he had to tape the radiator to get the engine up to the proper temperature.

“During one of the warm-up sessions early in the week we overdid the tape and fried the engine. That was some drama; all the way to Atlanta and no engine. Fortunately, the boss of US Datsun Racing was the late Dick Roberts. He had a tent organized to keep all the Datsuns in one happy family. In the tent were the late Paul Newman and the late John Fitzgerald – two great racers and friends. Since I was Dick’s personal physician, I had already met all these greats at Riverside Raceway. So as I quickly learned, a broken engine for a Datsun racer was no problem, as the factory had several spares and the personnel to assist Ric and me to get our engine back together again before the final and championship race.” 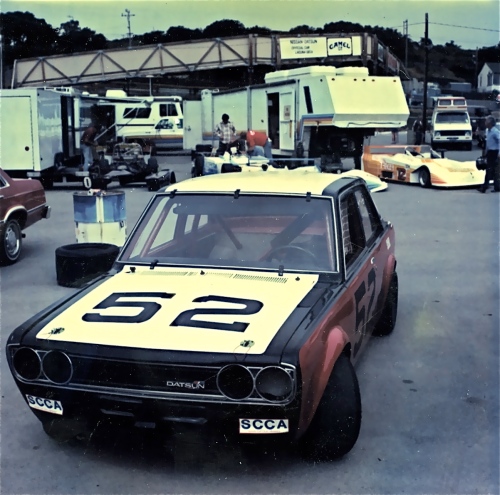 Art and Harry’s future would be driven by the two cars in the background. “The blue trimmed C-sport’s Racer is the late Tom Foster’s (owner of Foster Farm’s Chickens in Modesto, CA). To his car’s left is the Orange trimmed C-Sport’s Racer of the late Chuck Billington, who owned Billington Steel, a fabricating facility in Modesto. Here we were all so close at Laguna Seca, CA. These two speed demons won more SCCA C-sport’s Racer National Championships than is even imaginable. Two really great guys; we miss them very much. Within a year, after this picture was taken, with Harry and Ric pushing me forward, I would buy the Spec Renault racer, and Chuck would build the car out for me. They would later truck the Renault to Atlanta with their blue and orange babies too, so I could race in the National Championships.
About 80 Spec Racer Renaults showed-up that week in November 1985, and I recall getting through all the do or die heat races, in which you had to finish in the top half of each heat to qualify. By week’s end, I finished about 16th in the final race.”

Art sold his 510 to an “unknown” owner in 1985. That owner repainted the car to a BRE scheme in yellow and white, the previous owner (to me) James Peacock, purchased the car in 1994. James ran the car once at the Coronado festival of speed in 1994 and DNF’d with a broken cam shaft.

Both Art and Harry are still avid fans of racing to this day, and both have contributed their time, photos and stories to this blog.

UPDATE December 2013. Due to changes in my life and marital status I have had to sell this car and my Datsun BRE 240Z. This 510  was purchased by Jim Froula, owner of RacecraftNW and has completed an amazing restoration on this car!!